Choosing Hotel Aniene means you have great service and modern accommodation with free Wi-Fi access, all in a quiet, green area of Rome, a 15-minute bus ride from Termini Station. The guest rooms at the Aniene Hotel all come with a 32-inch LCD TV with satellite channels. A buffet breakfast is included in the room rate and sets you up for a busy day in Rome. This modern hotel is located in the north of Rome and takes its name from nearby River Aniene, Rome's second river. The large park of Villa Ada is also close by. The multilingual reception staff are always on hand and can provide valuable tourist information and recommendations. Two buses stop right outside the hotel and connect you to the main station and central Piazza Venezia in a matter of minutes.

Based on 4 guest reviews

The lobby is of medium size very confortable and cozy

This is modern style hotel with a luxury look.

The hotel offers modern accommodation with free Wi-Fi, Aniene Hotel rooms all have a 32 "LCD TV with satellite channels.

The Hotel Aniene has a Barcaffeteria open.

This modern hotel is located in the north of Rome and is named after the nearby river Aniene, the second longest river in Rome. Even the big park of Villa Ada is nearby. Two buses stop right outside the hotel and, after a few minutes at the train station and Piazza Venezia. 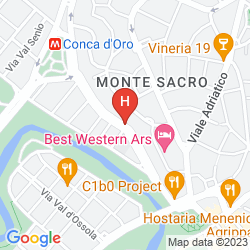