Enter your dates, select the room and choose out of 6630 hotels in Rome

The 15 best hotels in Rome selected for you 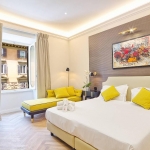 Classy hotel set in the historical centre, the K Boutique Rome features contemporary style interiors and a panoramic terrace with lounge bar at the top floor. A few steps away from elegant shops and... Read more 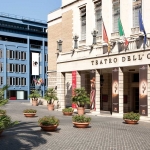 IQ Hotel Roma is one of the most appreciated 4-star properties in Rome because of its great location in the historical centre of the capital, only a 5-minute walk from the Termini railway station. Read more 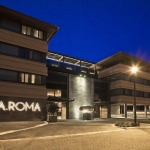 A short distance from St. Peters Square at the heart of Rome, the A. Read more 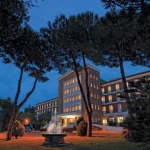 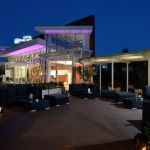 The Best Western Hotel Rome Airport, formerly Hotel Cancelli Rossi, is a 4 stars hotel located only 5 minutes by car from the intercontinental airport of Fiumicino, at the gates of Rome. Read more 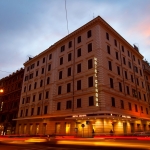 Situated near one of Rome's key transport hubs, the Hotel Genova is the perfect choice if you wish to be in the heart of the city. The four-star hotel offers high-quality accommodation to suit... Read more 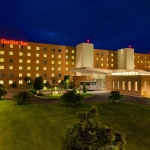 With easy access to Rome, the Hilton Garden Inn Rome Airport provides a 24-hour shuttle service to and from the International Airport Leonardo da Vinci, Fiumicino. Designed to fit the needs of... Read more 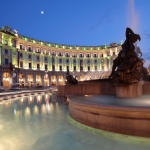 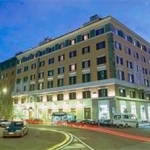 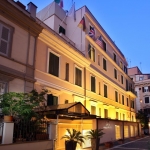 Located in the residential Parioli district, Hotel Villa Glori is the ideal accommodation for couples and families wishing to stay in the heart of Rome. This 4-star hotel is characterized by the... Read more 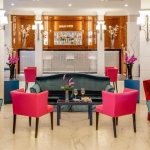 Located in the EUR business district, Hotel Cristoforo Colombo is a great choice for those who are in Rome for business or pleasure. The Euroma 2 shopping centre is within walking distance. Read more 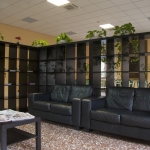 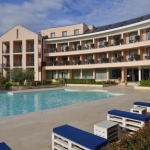 The Golden Tulip Rome Airport Isola Sacra is located just 4 km from the Intercontinental Airport of Fiumicino while the Nuova Fiera di Roma is situated 8 km from the hotel. Booking a room at this... Read more 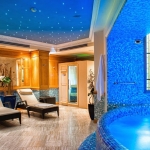 Located in the historical centre of Rome, in a beautiful 1800s building, Hotel Barberini is the ideal solution for both a business or a leisure stay in the Eternal City. All the luxury rooms and... Read more 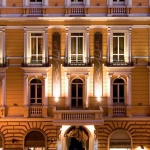 The Hotel La Griffe Roma MGallery by Sofitel is set in the centre of Rome, at the beginning of Via Nazionale, just a short walk away from the Stazione Termini. The location makes the difference:... Read more

Rome is the city with the highest concentration of historical and architectural in the world, its historic center surrounded by perimeter walls of Aurelian, overlapping testimonies of three thousand years, is an expression of historical, artistic and cultural world of Western Europe. In 1980, the city along with the Holy See extraterritorial properties in the city and the basilica of St. Paul Outside the Walls, was listed as a UNESCO World Heritage Site.
Rome, the heart of Catholic Christianity, is the only city in the world to host a foreign state within itself, the Vatican City: for this reason is often called the capital of two states. With about 52,000 hectares of farmland, Rome is the greenest city in Europe. According to tradition, Rome was built on seven hills (Palatine, Aventine, Capitoline, Quirinal, Viminal, Esquiline and Celio), whose identification is lost in the history of the origins of the city, still leaving doubts among historians.

EASTER IN ROME
To visit the city of Rome over Easter is an opportunity that you cannot miss. The Italian capital always impresses tourists and visitors with its archaeological treasures and historical beauties, especially the monuments and the museums which, in the Easter period, promote free admissions.
Over Easter, in particular, Roma takes on a very special charm thanks to many events related to the Easter celebrations. First of all, the Via Crucis, a representation of the last dramatic episodes related to the Passion of Jesus, celebrated by the Pope in person on one of the most beautiful locations in Rome. On Easter Sunday, then, you can attend the Holy Mass in St. Peter's square, an event that attracts thousands of people every year.

Walking through Rome is no doubt the best way to explore the city's main attractions. And if you have already been to Rome, don't worry as every time is different from the previous visit and will allow you to get what you previously missed.
You can plan your Easter break in Rome and reserve your hotel in the Eternal city from here. Alternatively, here is a short list including some 4-star hotels that offer an excellent quality/price ratio:

Last, but not least, some hotels in Rome offer the day use formula to their guests, as it already happens in Milan and Venice.

Churches not to be missed

Basilica of St. Peter, built within the Vatican City by the hand of the most famous artists of that time like: Gian Lorenzo Bernini (colonnade of St. Peter's Square), Michelangelo (dome frescoes and interior), Raphael Sanzio (frescoes inside), from 1506 until 1626.

Basilica of San Giovanni in Laterano is the "mother of all churches in the world" as it is the seat of the bishopric of Rome, built on top of an early Christian basilica and it was Emperor Constantine who wanted to build, was rebuilt in 1734 by famous architect Borromini, Roman Baroque style, inside there are excellent examples of late baroque frescoes and decorations.

The Basilica of Santa Maria Maggiore is one of the papal basilica, dedicated to the Virgin Mary is an ancient Christian basilica, adapted by Ferdinando Fuga in Roman Baroque style, the interior respects the original building with the mosaics of the fifth century.

The Basilica of San Clemente, located in the Monti district, near the Colosseum, the exterior is in late Baroque style, but inside we can admire the masterpieces of medieval art.

Colosseum is perhaps best known monument of Rome worldwide, was a Roman amphitheater for the organization of gladiatorial games and bigas races and plays, was the Flavian family to begin the construction, completed only at the time of Domitian, was once covered to protect spectators from rain or sun, and in the lower part there kept the wild animals and trained gladiators.

Fontana dei Fiumiin Piazza Navona is one of the most spectacular monuments, by the famous sculptor Gian Lorenzo Bernini, who wanted it to represent the four rivers of the continents known at the time (Nile, Ganges, Rio de la Plata and Danube) made of white marble is illuminated at night and the effect is really beautiful. Another well-known Roman fountain is the Fontana di Trev, located in the homonym Square, it represents Ocean who is riding a coach pulled by winged horses and tritons, legend says that if you throw a coin into the fountain and express the desire to return to Rome you will definitely come back within the year.

Another well-known monument is the Mouth of Truth, is on the wall of the church of Santa Maria in Cosmedin, is an ancient mask that since ancient times used as a manhole cover has the legendary reputation of pronouncing oracles and to detach the hands of people who were not telling the truth after having inserted their hand into the slit of the mouth.

Worth mentioning is also the Pantheon a temple erected to the Olympian gods by the Emperor Hadrian, then was converted into a Christian basilica, the most striking feature of this building is its enormous dome, coffered with a hole in the center to illuminate the interior of which is the shrine of the Kings of Italy and houses the remains of Vittorio Emanuele II, Umberto I and also the Renaissance artist Raphael Sanzio.

The Vittoriano is a monument erected to commemorate the unification of Italy and King Vittorio Emanuele II who became the bearer of the ideals of the revolution, is situated in Piazza Venezia near the church of Santa Maria di Loreto and the Forum of Trajan, was built in neoclassical style by using a white marble said botticino the shape of the monument is very special and has aroused some controversy, because the building was renamed "typewriter" and "wedding cake".

We recall also the residence of Castel Sant'Angelo, which is located within the Vatican City and that was the home of many Popes of Rome during the Renaissance, was initially built by Hadrian as his family's mausoleum, later enlarged and amended, also housed the prisons for "unwanted guests" from the top of the castle you can enjoy a splendid view of the Eternal City.

We would also like to remember that in Rome as well as museums and monuments, there are many other things to do, like walking from Piazza di Spagna to Via Condotti and admire the luxurious shop windows of the big names of Italian and international fashion and admire the palaces of the Italian Senate while walking from the Pantheon to Piazza Navona where you can photograph the Fountain of four Rivers, how can you do not go in the evening to eat at a traditional restaurant in Campo de' Fiori? A typical Roman square with the market of fruits and vegetables during the day, the evening becomes the destination of the romans' rite of the aperitif.
The neighborhood of Trastevereis the ideal place to spend a pleasant evening with friends, plenty of places where you can taste the typical Roman cuisine and fantastic homemade ice cream, the weekend in front of the church there are concerts and promotional events. Near Rome you can visit the town of Fiuggi, where gushes the famous water from the many beneficial properties and home to hot springs where you can receive treatment with water rich in minerals, the town of Etruscan origins Fiano Romano where you can admire the Castle, the Church of Santo Stefano and the New archaeological site with remains of important Roman villas.

How not mention one of the richest museums of Rome, the Vatican Museums and the adjoining Sistine Chapel? To visit without queue at the entrance you can buy tickets online, collected into them there is a vast collection of works ranging from ancient to modern times, such as the Transfiguration by Raphael Sanzio, the Descent by Caravaggio and Perseus Triumphant by Antonio Canova. The Sistine Chapel is one of the greatest examples of Renaissance and Baroque Art, built and painted between 1475 and 1481 by the greatest artists of the era such as Michelangelo, Raphael, Botticelli and Perugino, is known for being the location of conclaves and other major papal ceremonies.
The Capitoline Museums are home to a large collection of marble sculptures from the Roman and Renaissance, was the first museum in the world to be made public in 1471 when Pope Sixtus IV donated to the city of Rome his private collection of Roman bronzes, between the best known works present in the museum we remember the Lupa Capitolina, symbol of Rome and the equestrian statue of Marcus Aurelius.

Inside the beautiful park of Villa Borghese we can find Galleria Borghese, a museum that contains the private collection of Cardinal Scipione Borghese, which includes works by artists such as Raphael, Canova, Bernini, Caravaggio, Rubens , Correggio, Giorgione and Titian.