Housed in a 19th-century building, the Axel Hotel Barcelona & Urban Spa is located in a gay-friendly area of Barcelona known as the Gay-xample. Perfect for gay couples, who want to spend a pleasant stay in Barcelona, this stylish 4-star hotel is hetero-friendly too. Nearby the hotel you can find many points of interest such as the Picasso Museum, the Ramblas and the Gothic quarter. This design hotel offers modern rooms equipped with free WiFi, air conditioning and satellite TV. By booking a room at the Axel Hotel Barcelona & Urban Spa you can take advantage of an elegant spa area (available at an additional cost) with hot tub and saunas. At Bench Restaurant you can enjoy fine local and international cuisine prepared with fresh and high quality ingredients, while the Sky Bar, featuring a swimming pool, is ideal to meet other people sipping cocktails and listening to music.

Based on 2524 guest reviews

A super trendy hotel in Barcelona’s central Eixample district – an area known for its colourful nightlife. It provides chic accommodation for your visit to this capital of culture. Enjoy the cosmopolitan atmosphere and state-of-the-art design which fill the Axel Hotel Barcelona & Urban Spa. Its vibrant, colourful interior lies behind an elegant, 19th-century façade. Take a drink in its stylish bar or sit down for a meal in the fashionable gourmet restaurant. Gay Friendly hotel.

The area lays just a short stroll from the many sights of the city’s cultural heart, including Las Ramblas and the Gothic Quarter. The area around the Axel Hotel Barcelona & Urban Spa is known as the Gay-xample because of its lively gay scene. The staff has excellent knowledge of the local gay scene, though the hotel is also hetero-friendly, with an open-minded, cosmopolitan atmosphere.

Mainly aimed at the guys : ) but you won't see anything pink in this hotel. a good choice for open minded couples too and those who don't want to see children running around screaming everywhere.
facilities are good and the main reason for choosing this hotel was for the small roof top pool and bar. this is worth one of the stars and although the building is of immense character, the rooms are very basic for a four star hotel and i stayed in a premium room!
staff however are excellent and speak fluent english and breakfast is worth having.

Great from start to finish. loved the room. the roof terrace is a great plus. the staff were smart and friendly. hoping to return next month. good music in the bar. my thanks to the charming mc. 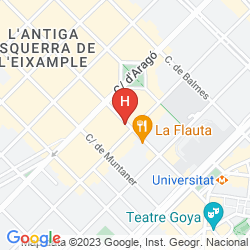