It is a good choice for travelers who prefer to stay in Ueno and Asakusa area. Shitaya Shrine and temples are scattered to the east of the hotel. A traditional public bathhouse is located in front of the hotel. Guests will be able to enjoy atmosphere of Japanese old downtown by taking public bath with local people. (01/07 HT)
The hotel is located in famous Ueno area, between Asakusa and Ueno park, two blocks away from subway Inari-cho station on Asakusa-Dori (street). From the subway station on Ginza Line, it is accessible directly to major areas of Tokyo, Asakusa, Ginza, Ueno, Aksaka and Shibuya Also it takes seven minutes by walk to JR Ueno Station (Asakusa Exit) where some bullet trains to North region (Joetsu, Nagano, Tohoku, Akita Shinkansen) stop. Keisei Ueno Station is 12 minutes walk, which is the terminal of Keisei Skyliner (Airport Express Train to Narita). For sightseeing, it is 10 minutes walk to Ueno Park(National Museum) and Ame-Yoko shopping street. Taito Ward Office and Ueno Police Office are also within walking distance from the hotel.

Based on 67 guest reviews

After several steps from the entrance, the lobby is small with some seating space. There is a computer that provides Internet access for staying guests.

It is a modern, 9-storey silver building.

All rooms are small with simple décor. It has warm atmosphere with cream color walls and white linen. All are equipped with a trouser press and a small closet. The bathroom is also small but in good condition. Internet access can be available in some rooms.

There is a restaurant on the ground floor offering meal three times a day.(except for weekends)

The Hotel Mystays Ueno East offers the use of a TV in the rooms. The hotel offers a wake up service for guests. 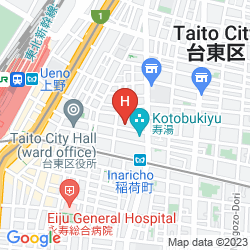