In an ancient palace of 600 stands the Hotel al Gazzettino, a time when a laboratory tissue and subsequently inn that hosted the Turkish workers and merchants who ran a business relationship with the "Serenissima". Over the past 50 years takes its name from the famous newspaper Gazzettino "which, until a few years ago, had its headquarters across the street. More than a century of activity makes the Hotel al Gazzettino one of the most famous structures of Venice, maintaining unchanged the hospitality and cordiality which handed over the centuries, most enjoys a privileged position for those wishing to visit the city.
The hotel is located in Venice's downtown, between S.Marco Square and Rialto Bridge, is a short walk away from the "Mercerie", the street with the most exclusive shops. It was a very ancient post, in the XIX century it was a textile workshop, later became an inn for the turkish tradesman arriving in town for commercial deals with the Republic of Venice "the Serenissima".

Based on 368 guest reviews

The rooms, with bathroom and air conditionning, overlook a typical Venetian canal, along which our guests will be able to admire and hear the serenades on gondolas; a romantic background for hearts searching for or consolidating love in this romantic city. You can connect to Internet from all rooms using Wi-Fi connectivity.

The Hotel Al Gazzettino offers the use of a TV in the rooms.

A typical little italian hotel with no frills but great atmosphere. room 12 where we stayed had a balcony overlooking a busy canal with gondalas and water taxis passing every few minutes.( i think room 12 is the only room with a balcony). the staff were happy to put two small beds into the large room for our 2 young children.
the best thing about the hotel was its location, a couple of hundred metres from the rialto bridge and a short walk from piazza san marco. wonderful places to eat and great shopping on the door step. 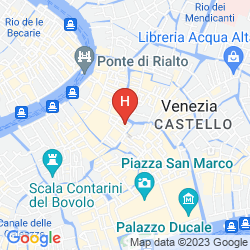