Centrally set in Innere Stadt, the 4-star Hotel Wandl in Vienna is opposite the St. Peter's Church, a short walk away from the Stephansplatz Underground Station. Featuring elevator and airy interiors with high ceilings, this ancient building was recently renovated, still preserving its original charm, now it provides latest hotel amenities. On site parking facility is available on request, as well as the transfer service from and to the Vienna International Airport. The hotel features a classy bar and offers for free the continental breakfast in buffet formula. Free WiFi Internet connection is also provided. The classy guest rooms all are non smoking, fitted with wooden floors, air conditioning, flat screen TV with sat channels, telephone, safe box and desk. The modern bathrooms are equipped with cabin shower, large basin, hairdryer, complimentary towels and toiletries. Small pets are allowed on request. The Hotel Wandl is surrounded by many of the most famous Vienna’s attractions, which are set at walking distance from it. The Kärntner Straße, a classy shopping area, is just 3 minutes away from it, while in within 10 minutes by walk is possible to reach the Wiener Staatsoper, the Imperial Crypt, the Albertina Palais Museum, the Hofburg Palace, the Art History Museum and the Natural History Museum.

Based on 384 guest reviews

The hotel is a three star hotel that combines tradition and modern conveniences. Later, in 1851, Joseph Georg Daum bought the house and turned it into a hotel with all the comfort Parisian style. At that time, the citizens of Vienna could pay a visit to the interior of the hotel in exchange for a small fee and 4.700 persons were interested to see him 5 days after the inauguration. In the process of modernization, an elevator was installed inside the building and the rooms were enlarged with private bathrooms. The hotel became the most elegant hotel in Vienna at the time.

This hotel has a traditional lobby with sitting area on the site.

The hotel is located in a building dating back to 1700.

We have 138 rooms and suites with private bathrooms equipped with bath or shower, telephone, satellite TV and hairdryer. Cots are available free of charge. Children under 6 years stay free of charge. You can bring pets for free.

A bar serving a wide range of hot and cold drinks is featured at the Wandl hotel. Each day, a breakfast buffet can be enjoyed on site.

The Hotel is a traditional 4-star hotel run by a family at the heart of Vienna, 200 meters from the famous Piazza di Santo Stefano. Our history dates back to the seventeenth century when Jakob Metz (Director of the Camara Court and Governor of the Palace of Laxenburg) gave the order to build the so-called House of the four seasons. 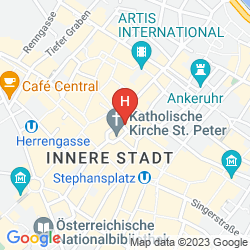