In addition, Mercer hotel has a swimming pool, WI-FI access, a day-care centre, transportation to local trade fairs, personal shoppers, a massage service, and an exclusive offer of sheets, pillows and fragances.
This architectural marvel is located in the heart of Barcelona's Gothic quarter on mythic Calle Lledo, just a short distance from the Plaza Sant Jaume and Ramblas, in what was then the Roman city of Barcino. From the hotel there are exclusive views of the dome of the church Santa Maria del Mar, the basilica of Sant Just i Pastor and the Cathedral. 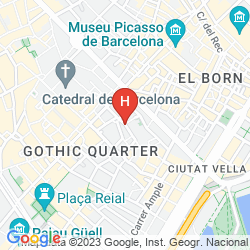