The hotel enjoys a relaxing lounge Living Room with free Wi-Fi, computers and library. There is also a gym and facilities such as currency exchange and tour desk. The on-site restaurant Asia de Cuba offers a creative menu that combines Asian and Latin American cuisines. The restaurant has a photo of a 4.5 meter high waterfall. This design hotel in Manhattan offers a restaurant, cocktail lounge and gym, as well as in-room spa treatments and mini bar. The hotels have advised that clients will be charged 50.00$ on the spot for any early departures.
The hotel is located 6 minutes walk from the Empire State Building. Grand Central Station is within 8 minutes walk from Morgans New York. Times Square, Rockefeller Center and Radio City Music Hall are less than 1.6 km.

Based on 2017 guest reviews

The turn-of-the-century building is grand from the outside, with its Beaux-Arts limestone facade, but inside is smaller and less intimidating than Morgans Hotel Groups other hotels.

The rooms are stylish in a masculine way, but far from overwhelming. Guests enjoy low profile beds, down pillows and comforters, fine Oxford bed linens, distinctive maple furnishings and upholstered window seats. Bathrooms are modestly sized and tiled in black and white, while bedrooms are a calming caramel, ivory and pale gold. The fabrics provide an unexpected tingle ,corduroy armchairs, suede banquettes and silk lampshades.

If you are hungry for a bit of outrageous style, eat at the hotel's restaurant where you'll find massive expanses of white marble, the "make new friends" communal table, and motel style waterfall mural. The cuisine is described as New York-innovative pan-Asian, with a dash of Caribbean flair.

The hotel is suitable for sportsmen. There is a bar inside the hotel.

The Hotel Morgans New York offers the use of a TV in the rooms. The hotel rooms offers WI-FI wireless Internet service. 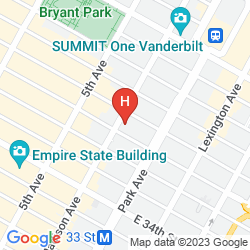