New York Marriott Marquis brings the energy of Manhattan to your door. Located in the heart of Times Square, this contemporary hotel is perfect for weekend getaways, family vacations and business travel in NYC. We boast updated rooms and suites, high-speed elevators, and three vibrant restaurants and lounges. Ensuring entertainment is just around the corner, this modern NYC hotel puts you near famous attractions, such as Fifth Avenue shopping, Radio City Music Hall, Rockefeller Center, NBC Studios, Central Park, Carnegie Hall, Lincoln Center, UN headquarters and Madison Square Garden. Our central location makes us one of the top hotels in the city and is the perfect choice for meetings, conventions, social events and weddings. With renowned service, creative catering and a variety of ballrooms, we turn events into magical occasions. When looking for an unforgettable getaway in the heart of The Big Apple, look no further than New York Marriott Marquis.

This is a modern building.

The View Restaurant & Lounge Enjoy breathtaking views of New York City at one of the best New York restaurants Times Square offers while enjoying dinner or a drink. The only revolving roof top restaurant in the city, we feature the freshest ingredients grown in the state of New York. Broadway Lounge One of the newly renovated restaurants Times Square offers, Broadway Lounge overlooks Times Square and is open in the evening. The redesigned space is the perfect choice for grabbing a light, pre-theater snack or catching a sports game of choice. Crossroads American Kitchen & Bar New among restaurants in Times Square, Crossroads features American cuisine for breakfast, lunch and dinner. The décor features a dazzling 21-foot spiral centerpiece with 11 TVs and a 20-seat bar. Menus feature various selections for sharing and entrees.

Best hotel in nyc hands down!!

Best location, best lobby, great food, there is nothing bad about this hotel!!

The marriott marquis is in a fantastic location with beautiful views of the city, has fantastic food, and the room was luxurious. 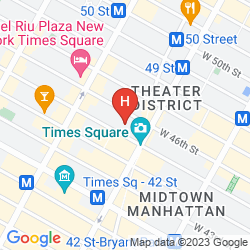