Exe Plaza Mercado is located less than twenty metres from its wonderful Plaza Mayor, where the life of the city is located. Whether in summer or in winter, here you can see students and people from all over the world who are attracted by a capital city seeping with culture.
When you leave the Plaza Mayor by Rúa Mayor, which is also very close to Vega, you immediately come to the Casa de las Conchas, the Cathedrals of Salamanca (the old one and the new one), its university, the Clerecía and San Esteban, all so close at hand. And then, after passing the Cathedrals, you arrive at the unmistakable Casa Lis, with its wonderful stained glass windows, which turn the sun into many colours.

Based on 1055 guest reviews

Exe Plaza Mercado is a listed building reconstructed with its original facade made with the beautiful "Villamayor Stone" which, while maintaining the spirit "cheap & chic" chain is housed in a design hotel at a reasonable price, where our employees will be happy to help you get to different places inside and outside the city.

Exe Plaza Mercado is a faithfully reconstructed, 38-room hotel that maintains its original façade, with lots of interior light, comfortable rooms and close-by and handy services to offer its guests. 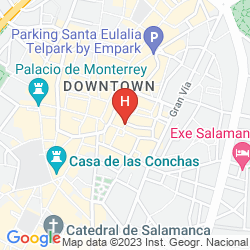