Located in the heart of Amsterdam, the newly opened Art'otel amsterdam, by park plaza is a sleek and sophisticated hotel with interiors featuring Dutch artists. The hotel is within walking distance to many of Amsterdam's main attractions and shopping neighbourhoods. Rooms at the Art'Otel Amsterdam feature work by multidisciplinary contemporary artist Atelier van Lieshout, a Dutch art, design and architecture company. Rooms are modern, equipped with mood lighting, a multimedia connectivity panel and a flat-screen TV. Rain showers come standard in the bathrooms, and guests are treated to top-quality toiletries by spa brand Elemis. Just a few minutes walk from the Art'Otel Amsterdam, and guests arrive at Amsterdam's well-loved attractions, such as the Anne Frank House, Dam Square and the Royal Palace. Head out for shopping on the pedestrian friendly Kalverstraat, or in the boutique-filled Negen Straatjes (Nine Streets). Tea/Coffee Making Facilities. Double Glazing. Lounge Area. Bathroom with bath. Bathroom with shower. Express Check Out. Year of construction - 2000. Disabled Access. Massage (Chargeable). Credit Cards - Amex/Visa/Diners/Mastercard. Latest check-out - 12.00. Business Centre.

Based on 1479 guest reviews

The hotel has a very welcoming lobby and as the designer is the renowned van Lieshout and the van Lieshout gallery has provided most of the artwork and design, it is no accident that the reception desks are actually very large, red heads as van Lieshout story throughout the hotel is the story of life. There is also a large and oversized lamp in the lobby with its stand being in the style of 2 adults and a child and everywhere you look, you will see this theme. Leading up from the main lobby area is a seating area known as the library due to the books and magazines available for guests to peruse, but the hotel also has a beautiful and welcoming lounge, with feature fireplace, seating and works of art

This hotel is located in a historical building

The bedrooms are large for Amsterdam with the smallest starting at 25m2. They are very modern with a predominantly silver and black colour scheme, mirrored doors or smoked out doors seperating the bedroom from the bathroom. They all offer an espresso machine, inbuilt flat tv, media panels which include foreign plugs and allow you to connect your ipads or laptops to the television, and free wifi. The bathrooms are immaculate and offer large, walk in rain showers.

The hotel is suitable for sportsmen. The hotel offers a bar to enjoy a drink and relax. The Hotel Art'otel Amsterdam, By Park Plaza offers disabled facilities. The accommodation is suitable for those who love shopping. There is a solarium on the premises. 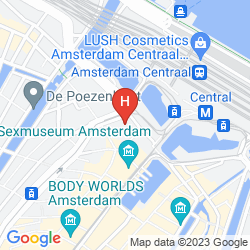