The magnificent fifth-floor pool, with hydromassage and water features, is looking towards the blue horizonheated, to afford you the pleasure of complete relaxation throughout the year. Guests can have lunch by the poolside, on the beautiful terrace and in the adjacent panoramic restaurant bar, as well as savour delicious snacks or aperitifs whilst enjoying the enchanting view that fuses land with sea. The sauna, fitness centre and holistic beauty treatments will give a total relax to guests with a reinvigorating and multisensory experience in an elegant environment. Spending a few hours at the Wellbeing Centre will regenerate the senses and relax the mind allowing you to forget the smallest concerns of everyday life. The spa is at an additional cost, and reservations are required.

Based on 1148 guest reviews

the external appearance of the building is an integral part of the architectural heritage of Viareggio, the facade as the whole building has undergone several restorations that have reported in total in its splendour luyce.

The 106 rooms, of which 87 are standard and 19 are suites, are on five floors, each one of which has a different style of decor. The rooms, which have views over the Apuan Alps and the Tyrrhenian Sea, are beautifully appointed and have broadband Internet, plasma satellite TVs, a choice of pillows and beautiful marble bathrooms with showers and/or bath tubs.

The traditional cuisine served in the Regina Restaurant is accompanied by a selection of fine wines to be enjoyed in the elegant and exclusive ground-floor room or on the veranda overlooking the sea. Also available for events and ceremonies.

In the heart of Viareggio, a stone's throw from the sea with a beautiful view and pine trees, green lung of the city, very close to the motorway exit, train station and historic centre, is a prestigious luxury hotel, a member of Small Luxury Hotels, built in the early 20, revised in 2004 after 2 years of restoration, which brought the hotel to its former glory. 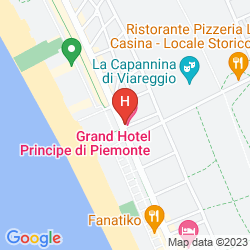