To complete the offering of the David Palace Hotel, the American bar, billiards room, internet point and panoramic room on the 5th floor to enjoy an unforgettable spectacle.
David Palace Hotel is located in Porto San Giorgio, overlooking the largest marina in the Adriatic and near the beach that has a blue flag of the European Community. Furthermore, only 7 Km from the hotel is the medieval city of Fermo, the most noble cities of the Marches.

Based on 216 guest reviews

The hotel has several meeting rooms, with a maximum capacity for the bigger room of 100 people.

The rooms are modern and comfortable equipped with all the modern facilities. All rooms have sea view. 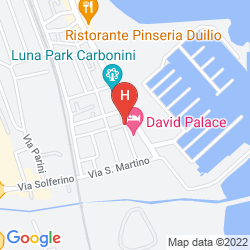