Property Location Located in Orta San Giulio (Lake Orta), Hotel Santa Caterina is minutes from Sacred Mountain of Orta and Mario Motta Plaza. This hotel is within close proximity of Villa Bossi and Basilica of San Giulio.Rooms Make yourself at home in one of the air-conditioned rooms featuring plasma televisions. Satellite television is provided for your entertainment. Bathrooms feature showers, complimentary toiletries, and bidets. Conveniences include phones and desks, and you can also request cribs/infant beds (surcharge).Rec, Spa, Premium Amenities Take in the views from a garden and make use of amenities such as complimentary wireless Internet access and a television in the lobby.Dining Satisfy your appetite at one of the hotel's 1 restaurants. A complimentary breakfast is included.Business, Other Amenities Featured amenities include a 24-hour business center, dry cleaning/laundry services, and multilingual staff. This hotel has 2 meeting rooms available for events.

Based on 224 guest reviews

The Hotel Santa Caterina offers the use of a TV in the rooms. 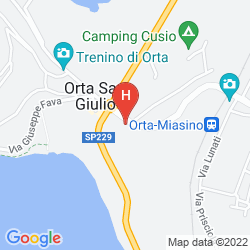