The Hotel Nacional de Cuba is a historic 5 star hotel in the city of Havana, Cuba. The building was opened back in 1930, when Cuba was one of most coveted travel destinations for American people and the embargo against the island had not yet started. Later on, during the crisis, the hotel was used by Fidel Castro and Che Guevara as their headquarters to organize the defence against the US. Many famous people stayed at the Hotel Nacional de Cuba, right in the heart of Havana, such as Marlon Brando, John Wayne, Gary Cooper, Marlene Dietrich, Buster Keaton, Frank Sinatra, Ernest Hemingway and many more. The hotel is still considered an authentic symbol of Cuban culture and history and is listed in the UNESCO World Heritage Site list. Located in the area of Vedado, the Hotel Nacional de Cuba offers majestic views over the harbour of Havana and on the whole city. For bookings and reservation, please check out the rooms' availability using the form below.

You will find a 24-hour front desk at the property. Vedado is a great choice for travellers interested in tourist attractions, local food and walking.

La Bodeguita del Medio is 3.1 km from Hotel Nacional de Cuba, while Old Square is 3.3 km away. José Martí International Airport is 16 km from the property.

The only nice about the hotel is his name

Customer services not good , came to the hotel @4pm , and i have a room @ 9.pm , employe not give a greeting to customer, employee don’t care about customers need ,

The location and. reception were top notch. the breakfast buffet is classic and the wait staff was friendly.

My first time in cuba and my experience with this hotel was excellent. the rooms were clean, spacious and nice. the staff was absolutely wonderful and restaurants, entertainment and the view was outstanding! this is where i plan to stay every time i visit!

My family has stayed in havana before but this was our first stay at the nacional. you will be immediately impressed with the elegance and beauty of the hotel, grounds and staff. the rooms were neat and clean but the rugs should be replaced as they are starting to show their age. the free wi-fi was great in most of the hotel floors but spotty in parts of our room. the breakfast cafeteria offered a variety of foods, fruits, freshly squeezed juices, delicious omelettes to order and the best cuban coffee around. the hotel bar was expensive and the drinks were weak. the cleaning staff were perfect. the concierge staff were great to deal with. being able to change your currency at the hotel was a huge benefit. the pool was beautiful and well cared for. i would definitely stay here again and recommend it to family and friends.

If you are going to cuba this hotel is ago od place to stay. it is easy to get to any part of havana from the hotel. the hotel is a tourist destination and is quite beautiful. services are good and they really try to please their guests.

After 2 weeks in casa particulares all over cuba, it was nice to see how the other half lives when visiting havana. beautiful hotel, great view and friendly staff.

Very nice historic hotel and staff makes everything to make it an enjoyable stay.

Old hotel with charm but dirty

We had two rooms #314 and #323 and we requested and paid for ocean view rooms. 314 had marble flooring with a beautiful unobstructed ocean view. 323 had dirty blue carpet with food stuck on it and a very bad smell. the ocean view was very very tiny and you had to stand in the far right side to see it haha. the manager tried to move us but we couldn't find an ocean view room. the room wasn't amazing but the staff was very friendly, all the amenities we needed including great customer service, money exchang, food just so so but over all stay was good. i would stay here again just in a different room. 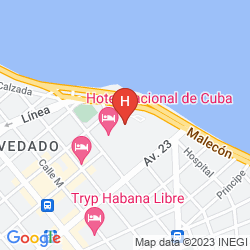