Enter your dates, select the room and choose out of 174 hotels in Havana

The 15 best hotels in Havana selected for you 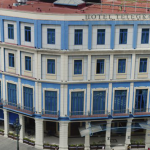 The Telegrafo Hotel is a marvellous 4 Star complex, located in a renowned area for shopping, La Habana Vieja, in the centre of the Cuban capital, La Havana. This historic hotel was built in the far... Read more 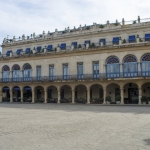 Hotel Santa Isabel in Habana faces Plaza de Armas, one of old Habana most important touristic areas. With a little and nice walk you can reach the waterfront and, with a taxi, Vedado. Read more 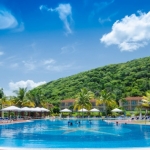 The Memories Jibacoa Hotel is an enchanting building situated in a beautiful territory between the mountains and the beach of Arroyo Bermejo, near Santa Cruz del Norte in Cuba. This elegant... Read more 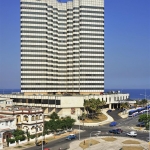 The Hotel Melia Cohiba is an elegant five-star building situated in the Vedado area, not far from Havana’s city center, one of the most modern part of Cuba’s capital. This is an ideal hotel if you... Read more 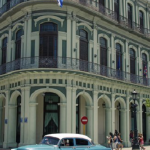 Saratoga Hotel is located near the most famous streets in Havana, in front of The Capitolio and close to the major attractions such as The National Museum of Fine Arts and El Floridita. Read more 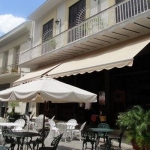 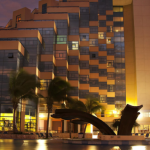 The modern H10 Habana Panorama Hotel, located in a strategic position facing the sea in the residential area of Miramar, is considered one of the best tourist structures in Cuba. This area of the... Read more 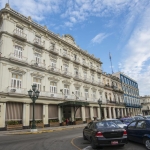 The Hotel Inglaterra Havana is a beautiful 4 star building located in the center of the capital, Havana. This famous hotel was built in 1875 and it was the favorite place in Cuba for celebrities... Read more 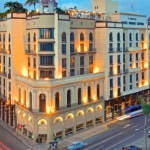 Located in downtown area of Havana, the Hotel Parque Central is the ideal place to book a beach holiday in Cuban 5 star accommodation. This hotel is located in the historic Old Havana, a few minutes... Read more 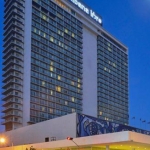 The Tyrp Habana Libre hotel is an exclusive structure in the very center of Havana, Cuba. You’ll be able to reach quickly the main attractions such as the Plaza de la Revoluciòn, the national... Read more 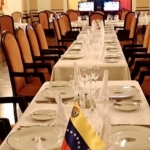 The Hotel Nacional de Cuba is a historic 5 star hotel in the city of Havana, Cuba. The building was opened back in 1930, when Cuba was one of most coveted travel destinations for American people and... Read more 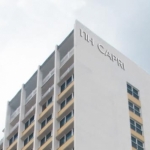 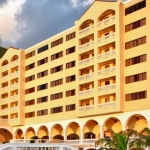 Luxury Quinta Avenida Habana hotel is located close to Havana, in the Miramar district. This 5-starred, 186-room and 6-floor structure offers a panoramic view of both the city and the Montebarreto... Read more 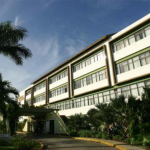 Hotel Exe Palco has a strategic location in the center of Habana. You could reach all the city's main attractions such as Casa Del Amistad, Fusterlandia and José Martí Monument in seconds flat. Read more 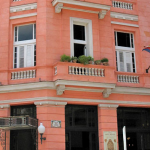 Hotel Ambos Mundus is located in the Old Havana area on the corner of Obispo and Mercaderes, just off the famous Plaza de Armas. All rooms at this hotel in Havana are equipped with the best... Read more

Havana is the capital of Cuba; it is located in the northwest of the island, and is the largest city in the Caribbean.

In Havana there are many 3, 4 and 5 star hotels in which you can stay; many central hotels propose special offers, allowing you to book a low-price room in Havana. Among the best hotels in Havana, we recommend to you are:

Best Things To See in Havana

Havana, with its Spanish colonial architecture, its quaint restaurants, museums and lively streets, is definitely a unique tourist destination, where you can fully appreciate Cuban history and traditions.

The colonial buildings are concentrated in Habana Vieja, or Old Havana, which has been declared a World Heritage Site by UNESCO. Here there is the Palacio de Los Marqueses de Aguas Claras, an old palace dating from the eighteenth century, which was restored in 1980 and became a famous restaurant in Cuba, called El Patio. Near the palace is the Cathedral Square, surrounded by important buildings as the Cathedral, dedicated to St Mary and St Christopher, also built in the eighteenth century, and the Colonial Art Museum with its collection of furniture dating back to colonial times. Around the square there are also a lot of bars and restaurants where you can sample Cuban specialties. Two other important squares of Habana Vieja are Plaza de las Armas (Arms Square) and Plaza Vieja (Old Square); in these district there is also the Bodeguita del Medio, which is one of two historical pubs , along with the Floridita, once frequented by the writer Ernest Hemingway, who spent some years of his life in Havana.

Through the avenue Malecon Habana Vieja is connected to many other districts of the city as Centro Habana, which is the historical centre of the town where you can stroll along the Paseo del Prado, which is the main avenue of Havana. In this district there is the National Capitol, where was based the Cuban Parliament before the Revolution, the Opera House and the Museum of the Revolution, located in the former Presidential Palace. Another historical district in Havana is the Vedado, where there is the Revolution Square, one of the places in this city that you cannot miss a visit.

Other attractions are the University of Havana, that was the centre of the revolutionary movement, and the National Academy of Fine Arts, located in a monumental building dating back to 1940. If you visit Havana, you can not in any case avoid walking through its streets, maybe stopping for tasting a Mojito or a Daiquiri as Hemingway did, and enjoying the unique atmosphere of the Cuban capital.

How To Reach Havana

Havana can be reached on one of the many international flights landing at José Martí International Airport, Cuba most important airport, about 18 km (11 miles) from the city centre.
From José Martí International Airport, reaching the city centre takes about 45 minutes. To reach Havana you can take an official taxi (the regular fare is around 20-25 CUC), rent a car directly at the airport or alternatively take a bus. Buses for Havana leave every 30 minutes but they must be paid with the local currency. Our advice is to opt for private transportation.

The Best Way To Go Around Havana

In general, visiting Havana is neither hard nor expensive. For small distances the best way is to go on foot.
Another comfortable way are taxis. They are very cheap and can reach every part of the city. There are different types of taxis in Havana: the classical tourist taxis and colectivos (vintage cars), as well as yellow cabs or coco-taxi. What should be avoided are illegal taxis. Official ones are operated by a driver whose id can be seen on his shirt.
As far as public transportation are concerned, it is best not to rely on local buses, often overcrowded, slow and often not on time. New urban buses are more expensive but reliable. They also cover the entire city and are the best way to move inside it. But the best option to be efficient and independent is renting a car, even a vintage one, to better enjoy the climate of the city. The only negative thing are roads, not very well equipped and in bad state.

When To Visit Havana

Being a tropical country, Cuba has a rainy season. The most humid, sultry and rainy months are those from May to October, during which it rains a lot and there is often the risk of hurricanes which often hit the Eastern side of the island.
Winter, corresponding to the tourist season, goes from December to April. These are the best months to visit Havana, when days a re longer and the temperature is between 25 and 28 °C (77-82.4 °F) on average.
The water of the sea is warm throughout the year and is perfect for immersions and snorkelling.