The Cappadocia Hotel has one restaurant with indoor seating and a terrace overlooking the spectacular landscape of fairy chimneys. You will also take pleasure from Cappadocia while watching the sunset from the terraces. Be a guest and get the utmost enjoyment out of this iconic landscape of hundreds of ancient cave and stone houses, fairy chimneys and other historical structures.
The Cappadocia Hotel is located in the neighbourhood of Esbelli overlooking Ürgüp. Having hosted many different civilizations for thousands of years, Ürgüp is one of the first settlement zones and most important towns of Cappadocia which is also known as the Land of Beautiful Horses. While its settlement history dates back to the Palaeolithic age, Cappadocia is known as the place where Christianity was first born. Having been one of the outstanding points of intersection of the Silk Road in the past, Cappadocia is now a place where nature communes with history. While having spectacular samples of interesting rock formations, known as 'fairy chimneys' formed by the rain and wind erosions of tuffs and lavas of Mount Erciyes, Mount Hassan and Mount Güllü, Cappadocia is also the home of the greatest outdoor museum of the world, namely Göreme Open-air Museum. Due to its natural and cultural diversity, Cappadocia has been on the UNESCO World Natural & Cultural Heritage List since 1985. You can enjoy many activities such as hot-air balloon tours, trekking, bike-riding, and horse-riding here.

Based on 53 guest reviews

The entirely cave engraved rooms have sun-soaked terraces overlooking spectacular views of fairy chimneys and cave settlements. The rooms are designed traditionally in order to harmonize this magnificence of thousands of years. With sizes ranging from 30 m2 to 60 m2, each room attracts attention with its unique design and is waiting for the hotel's new guests. 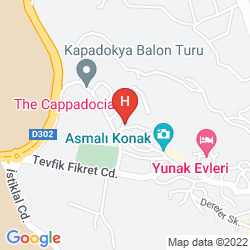