Facilities include 2 large outdoor swimming pools set in tropical gardens, one of which has a private jacuzzi. The fully equipped health club, conference room and clinic are located on the 3rd floor between the building connection. 2 tennis courts, 2 squash courts and a beauty salon are also available to complete the true deluxe class property. The hotel also has Tuk Tuk service between the 2 buidlings and and shuttle boat service to the nearby River City shopping centre. Helipad service is also av available. This hotel is very well known on its state of art conference facilities with one large ballroom and another 13 smaller conference rooms. 8 conference rooms are located on the 3rd floor of Krungthep Wing and 4 are on the basement level of Shan Shangri-La Wing offering a garden view.

Based on 8422 guest reviews

The very large lobby of the older Shangri-La Wing is gracious and overlooks the Chaopraya River. The exclusive Krungthep Wing has a traditional lobby that is arguably Bangkok's most impressive. Plenty of seating areas are available in both wings.

The hotel consists of 2 wings. The main wing is called Shangri-la Wing and the other the Krungthep Wing. Both wings of the deluxe hotel are landmark modern concrete high-rise towers. The Shangri-La Wing houses 676 rooms over 25 storeys and the Krungthep Wing has 174 rooms over 16 storeys.

In the Shangri-la Wing rooms are large at 34 square metres and furnished in pastels. Bathrooms are large and in very good condition. Most of the rooms have partial river views and full river/pool views. Coffee/tea making facilities are available. The deluxe room of this main wing is at a larger size of 40 square metres with the same set up and private balcony. All deluxe rooms are river and pool view. The Krungthep Wing has only deluxe rooms and are very large at 40 square metres. Each of these very very large rooms have riverfront private garden balconies. They have exceptional bathrooms with separate walk in showers. Rooms are decorated with Thai traditional painting to reflect Thai life in the old era.

The hotel has totally 8 restaurants and 4 refreshment bars offering a range of cuisines from Japanese, Chinese, Italian and international to Thai. The hotel also has a dinner cruise serving international buffet.

The hotel is located on the Chao Phra River approximately 100 metres from the junction of Silom Road and the new road. Guests can also access the other side of this hotel at Krungthep wing from the BTS sky train station, Taksin, which is within 2 minutes' walking distance. 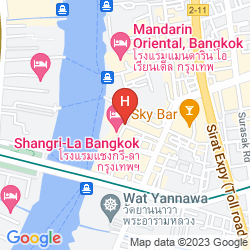