Property Location With a stay at City Hostel in Stockholm (Central Stockholm), you&apos;ll be minutes from Oscar Theatre and Stockholm City Hall. This hostel is within close proximity of Stockholm Waterfront Congress Centre and Stockholm City Conference Centre.Rooms Make yourself at home in one of the 21 guestrooms featuring microwaves. Prepare your meals in the shared/communal kitchen. Computers with complimentary wired and wireless access are provided to keep you connected. Bathrooms feature showers, complimentary toiletries, and hair dryers.Amenities Make use of convenient amenities such as complimentary wireless Internet access, concierge services, and a television in a common area.Business, Other Amenities Featured amenities include complimentary wired Internet access, complimentary newspapers in the lobby, and luggage storage.

Based on 394 guest reviews 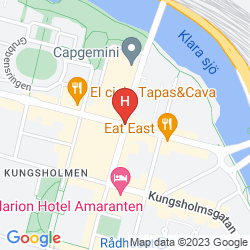