Based on 827 guest reviews

The lobby is big and wide. The decoration is modern with a good selected colours.

The exterior is a massive twin towers building overviewing Casablanca. In same opinion, it's considered maybe the best modern bulding in the whole city.

There is several restaurants in the hotel but maybe the 27th floor gastronomic restaurant called the Sense under "freres pourcel" advice and offering panoramic views of the city is one of the hotel key points. There is also a bar in the next floor which offer light meals. There is another two restaurants with different menus and options to cover any taste and need.

The Hotel Kenzi Tower offers air conditioning. The property is fully equipped with a conference room. 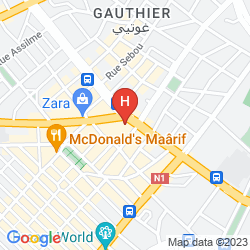