Built on a Viking–era longhouse, the charming 4-star Hotel Reykjavík Centrum is located in the hearth of the old town, at walking distance from the harbour. The hotel provides high standard of accommodation, the rooms all offers modern comforts and high quality amenities. The hotel has contemporary style interiors, yet some guestrooms are appointed with lovely traditional Icelandic style. The guestrooms all have air conditioning and heating, direct line phone, minibar, work desk; the bathrooms all have shower, some also have bathtub. Complimentary bathrobes and toiletries are provided. The breakfast is prepared in the dining room, offering local specialities and tasty dishes. The Hotel Reykjavík Centrum is next the excellent Restaurant Fjalakötturinn, which offers the finest dining experience in Reykjavík. The exclusive Hotel Reykjavík Centrum is a perfect place where to spend a romantic getaway, it is at walking distance from the best Reykjavík has to offer, not only fine shops, restaurants, nightclubs and pubs, but also art galleries, museums, theatres and cultural attractions.

Based on 1772 guest reviews

The Reykjavik Centrum hotel boasts an exhibition center dedicated to the Vikings, it is really a magical hotel built with imagination and an eye for details, the architectural and building renovations were carried out by a company renowned for its expertise in restoring the Icelandic historic buildings. The location and its historical provenance of the hote are unquestionably unbeatable. It features an award-winning restaurant, Fjalaköttur, where guests can enjoy traditional Icelandic dishes accompanied by an extensive wine list, as well as an indoor café bar, Uppsalir.

The medium-sized rooms are among the highest quality on the Island. They are furnished in a modern style, however with charming touches of tradition. Both rooms and bathrooms are in exceptional condition, complete with every comfort such as: hairdryer, wifi, air conditioning, safe, minibar, telephone and TV. In addition, the structure is also equipped for disabled people.

This hotel could not really be in a better location, right in the center of Reykjavik's old town and just around the corner from the Parliament Square. It could really be said to be located right on the place where the history of Reykjavik began as during the construction of the hotel were found archaeological remains that were part of the original settlement, and which are exposed in a mini-museum in the basement of the hotel . It is 200 meters from the city's Art Museum and just 3 km from the airport. 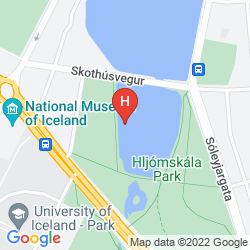