A good centrally located hotel with excellent rooms. The River Danube is within walking distance as is the famous pedestrian Vaci St. with its shops, bars and restaurants. (07.11 MP)
Located in the heart of the capital, in the lively Pest side, near the Danube, the hotel is located in the city's commercial district, and in the heart of the nightlife district. It is only 3 kilometers from the main railway station and 50 minutes by car from the airport. The Hotel, which is part of the Danubius Hotels Group, offers first-class services while maintaining the standards of a 3 star.

Based on 2192 guest reviews

Of medium size, with dark brown furniture, the lobby has several couches and a cozy bar.

The history of this hotel dates back to more 'than one hundred years ago ... The idea of creating such a structure, 3 stars, the center of Budapest came in 1867 when they were developing the first buildings along the main central streets of the city organized events. Erzbet The hotel was opened in 1873, the year the Hungarian capital Budapest was being formed by the merger of three small towns: Pest, Buda and Obuda (Old Buda). The hotel was so-named because it was allowed to Sissi, Queen Elizabeth, wife of Emperor Francis Joseph, the protagonist of the Austro-Hungarian Empire. The actual opening of the hotel came in 1976. From that date until today continues to be renewed, however, keeping the historic features.

The hotel restaurant each morning to its guests a rich breakfast from 7.00 to 10.00. During the day you can enjoy bevamde, coffee, tea, snacks and sandwiches in the Snack & Drinkbar in the lounge. Service available from 10.00 to 22.00.

The Hotel Erzsebet City Center offers air conditioning. The property is fully equipped with a conference room. Guests can use the hotel's restaurant. The Hotel Erzsebet City Center offers a laundry service. The hotel has a car rental service. The hotel will host your pets. There is a projector available for the use in meetings. The hotel is great for those who travel for work. There is a mini-bus service for guests to the local airport. 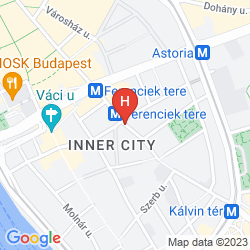