Enter your dates, select the room and choose out of 70 hotels in Paris - Disneyland Paris

The 15 best hotels in Paris - Disneyland Paris selected for you 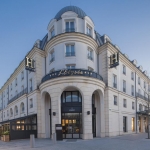 The Elysee Val d'Europe hotel is ideal for tourists who are keen to visit the famous Disneyland theme park. The hotel has over 150 rooms and includes all modern amenities such as complimentary... Read more

The Relais Spa Chessy Val d'Europe is situated just one train stop from the famous theme park of Disneyland Paris. A free shuttle service to the theme park is available on request. Read more 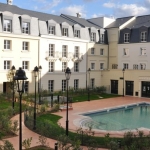 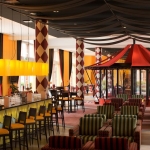 Magic Circus Hotel is located at Marne-la-Vallèe, in the heart of Disneyland Paris. This elegant 4 star hotel is brightly furnished, in an environment recalling a circus. Read more 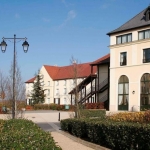 Located at just 20 minutes from the largest amusement park of Disneyland Paris, the Kyriad Hotel Disneyland Paris offers all its clients a shuttle service to the park free of charge. Read more 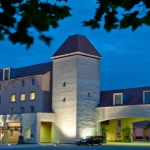 The Explorers Hotel At Disneyland Paris is located near the famous Disneyland Paris. Thanks to a free shuttle service from the hotel you can easily reach the theme park. Read more 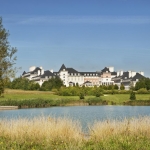 Dream Castle Paris is the perfect place to stay for those who want to experience the magic of Disneyland Paris. Booking at the Dream Castle Hotel you can take advantage of a convenient free shuttle... Read more 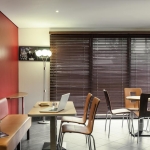 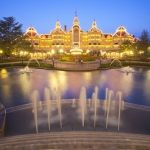 The hotel offers guests many facilities including breakfast with Disney characters, up to 2 extra hours of magic in Disneyland, valet parking, free Wi Fi, a fitness center, a spa, shops, children's... Read more 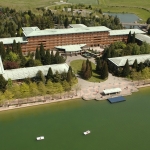 The hotel offers guests many facilities including a free shuttle service to the Disney park, a boutique, an indoor play area, an indoor theme with slides, an outdoor pool, a fitness room with sauna... Read more The Hotel Balladins Torcy is located in Marne-La-Vallee not far from Paris and being at 15 minute from Disneyland area. It is a 20-minute drive from Paris and 1. Read more 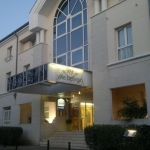 This family-friendly city hotel offers 120 rooms. The property is equipped with an underground car park, and a restaurant (open seasonally) as well as air conditioning, a lobby area with a 24-hour... Read more Paxton MLV is only 10 minutes by train from Disneyland Paris and 5 minutes from Val d'Europe. With an on-site bar, it offers free access to the indoor swimming pool, and also has bowling alleys and... Read more 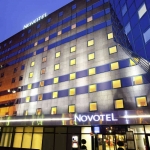 This establishment comprises a total of 144 guest rooms, including smoking, non-smoking and disability-friendly rooms. The hotel offers business travellers an auditorium which holds 250 persons and... Read more This 4-star property which opened early 2007, may be considered an excellent superior first class property. Due to its close proximity and rapid access to both Disney resort parks, this hotel is a... Read more

Thanks to Hotelsclick, it is possible to stay at several 3 or 4 stars hotel near Disneyland Paris because of special offers that allow you to visit the park and Paris proper. Among the hotels, there are the Hotel HiparkSerris-Val D'Europe, 3 stars and less than 2 km from Disneyland; the Hotel Kyriad Marne la Vallee Torcy, 3 stars; the Hotel Kyriad Disneyland Resort Paris, which offers a free shuttle service to the park to all the guests; the Dream Castle Hotel At Disneyland, 4 stars, a historical castle surrounded by a classical French garden; and the Hotel Relais Spa Chessy, 4 stars, which has more than 800 squared meters dedicated to relax and wellness.

Information on visiting Paris and Disneyland Paris. Paris, the capital of France, is in the North of the country and it is known to be the most beautiful and charming cities in the world. It is the type of place that should be visited at least once in everyone’s life.
The French capital is the largest city in France: it has 12 million people in the metropolitan area and it is divided in 20 arrondissements.
Historically, Paris has a tremendousdepth of culture – which constitutes the majority of the touristic attraction of the city. From museums to cathedrals, from squares to popular streets, Paris has charming and unique attractions that elevate it above other European cities.

Among the most important places to visit include: the Eiffel Tower, which has been the symbol of France for 120 years, and that is particularly romantic by night when it’s lit up; Notre Dame cathedral, one of Paris’ most visited sites; and the Avenue Champs-Elisées, the world-famous street filled with restaurant and luxury stores.
This beautiful city is, today, the most visited European city, thanks to its historical, artistic and cultural treasures. Even the Seine, which intersects the heart of the city, is included among UNESCO’s world heritage. From the river, by means of mini-cruises and boat trips, it is possible to get a view of historical buildings and bridges.

Paris is not only the artistic and cultural capital of Europe, but it is also the capital of entertainment and amusement, thanks to one of kids and families’ favorite places: Disneyland Paris.
The amusement park Disneyland Paris is one of the most important theme parks in Europe, opened by the Walt Disney Company in 1992. It is in Marne-la-Vallè, about 32 km from Paris.
You can easily get to the park from the train station Gare de Lyon in Paris through the TGV in just 45 minutes. There is also a shuttle service – the Magic Shuttle – that departs from the Charles-de-Gaulle airport and from the Orly airport. Disneyland has many attractionsthat entertain and amuse both kids and adults. There are musical Disney-themed parades with the participation of Mickey Mouse, Donald Duck, Minnie, Winnie the Pooh, Snow White, Aladdin and many other memorable characters, which all contribute to making the park a unique experience.