Hotel Ambos Mundus is located in the Old Havana area on the corner of Obispo and Mercaderes, just off the famous Plaza de Armas. All rooms at this hotel in Havana are equipped with the best amenities and most have an incredible view of the whole city. On the terrace of the fifth floor, the top floor is a restaurant, a stop you should not miss for dinner or a drink with a view. Hotel Ambos Mundus offers its customers parking, room service, a safety-deposit box and a 24-hour reception. A very characteristic feature of hotel Ambos Mundus Havana is a lift from the 30s, which adds a lovely touch. Paseo del Prado, El Capitolio and the Great Theatre of Havana are at a distance of 20 minutes' walk. Ambos Mundus is famous all over the world for being one of Ernest Hemingway's favorite lodgings. The writer often hung around the lobby bar and stayed in room 551, now used as a museum, showing the original furniture and a typewriter on which Hemingway wrote the first chapters of his most acclaimed novel For Whom the Bell Tolls. It is said Havana has become the home of the ghost of Ernest Hemingway, who still wanders around the place he loved. Would you dare to spend a night here and maybe meet his ghost?

The rooms are comfortable and this also applies to the bar area on the ground floor, with its cozy and modern sofas. The roof terrace offers a splendid view of the Plaza de Armas and its surroundings; the main advantage of staying at the Hotel Ambos Mundos is its proximity to all the best and most beautiful parts of Old Havana.

The 49 standard rooms of the Ambos Mundos Hotel are rather small but functional. Most rooms are in fair condition, as are the bathrooms. They are basic and furnished with very simple furniture and have satellite TV, fridge, air conditioning and iron / ironing board.

The restaurant is situated on the sixth floor and serves local and international cuisine.

Centrally located, the hotel is on the corner of Rua do Bispo in the heart of the historic center of Havana. The old center of Havana Vieja was rated World Heritage Site by UNESCO in 1982.

Right in the heart of 'old havana' this hotel oozes both elegance and charm. would definitely stay here again.

This hotel is no doubt a very well known hotel and full of history, however, it's also very rundown, even for cuban standards. the room was dark and smelled of mold, there was dust and other peoples hair everywhere. when we arrived, the toilet had just been mopped, and you could see dust and hair had just been dragged around. towels all had staines on them. toilet door had small semi tinted windows, and you could see in from the outside, which was inconvenient because i travelled with two friends of the opposite sex.

hotel breakfast is between 7-10am up on the roof, however, if you go up late like we did, around 9am, everything had been out for a while and covered with flies. i ended up getting food poisoning after my first breakfast (suspect it was the not så fresh fruit).

lift to rooms was broken, so everyone had to take the freight lift, a tiny stinky lift with room for 5 people, so we ended up taking the stairs quite a bit.

location is very good, right in the old havana, close to nearby restaurants, which is also the downside, as it's very touristy. there's a wifi hotspot just outside the hotel, and also on the rooftop, which was convenient and you could buy wifi cards in the lobby.

would not stay here again, as it's not the 4* as it's advertised. perhaps we had different expectations, as we stayed in a lovely case in trinidad prior to arriving to havana, and therefore expected a hotel to be fancy, but turned out to be overpriced and dirty. 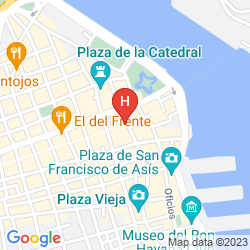