Based on 6313 guest reviews

Designed to evoke an image of a grand palace on the mythical Lost Continent of Atlantis, The Royal at Atlantis offers 1,201 air-conditioned guestrooms in two salmon-colored wings topped by spires colored like weathered bronze and connected at the ground-floor level. The East Wing rises in three steps of 12, 16, and 24 stories. The West Wing rises in steps of 16 and 20 stories.

The room category is Harbour View. The Royal at Atlantis rooms are larger than those at the other two Atlantis towers, Coral Towers and Beach Tower. (Unlike those towers, however, The Royal at Atlantis rooms provide step-out rather than full balconies.) Tropical décor features sand-colored walls, crown molding, and carved, light-colored furniture. Matching bedspreads and drapes display a coral motif in blue, green, and orange. There are two telephones, including one in the bathroom.

The resort includes a large variety of restaurants, bars, and lounges as well as poolside snack-and-beverage carts. Seagrapes, located in the Beach Tower and open for breakfast, lunch and dinner, serves dishes from around the world in an upbeat atmosphere featuring views of a lagoon full of exotic marine animals. Beach Tower Lobby Lounge for coffee drinks, bagels, pastries and cocktails day and evening. The Cave Bar and Grill is an open-air lunch spot featuring underwater views of marine life and serves burgers, hot dogs, salads, ice cream. The following restaurants are located between the Beach and Coral Towers: Villa D'Este - Northern Italian cuisine under frescoed ceiling; Mama Loo's - specializing in traditional Chinese recipes; Bahamian Club, a superb dining experience with gourmet salads, followed by the finest cuts of steak, including Chateaubriand for two. Casa 'Angelo, Nobu, Cafe Martinique and Nesa grill, only allow children ages 12 and older, there are no child menus and strollers are not allowed. 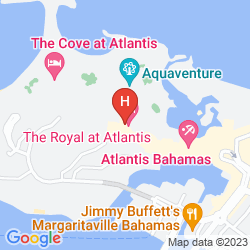