No matter if you are in London for business or leisure, stay at Flemings Mayfair, one of the oldest and most refined hotels of the capital. The great location in the heart of elegant Mayfair, a side street off Piccadilly, allows guests to easily reach some of the most famous points of interest of the city within half a kilometre (0.30 miles) places such as Buckingham Palace, Bond Street and Green Park. Trafalgar Square, Hyde Park, St. James's Park, Big Ben are all less than 1.5 km (one mile) from the property. This luxury 4-star hotel of London boasts rooms, suites and great apartments. All types of accommodation have a unique style and facilities such as minibar, tea and coffee making facilities, bathroom with luxury toiletries. Ormer Mayfair, the Michelin-starred restaurant of the hotel, offers an exclusive gourmet menu, the right place for a very special dinner. Manetta's Bar is a fashionable lounge where you will enjoy exquisite cocktails and drinks in an environment recalling the '30s. The refined Drawing Room, with its Indian-inspired design, serves the traditional afternoon tea. Flemings Mayfair offers great connection with public transport: Green Park Underground Station is about 300 metres (990 feet) away. You will also find an equipped gym with state-of-the-art machines, all available for free. If you want, you can also book your personal trainer for a great workout.

Based on 1775 guest reviews

Flemings Mayfair is one of the oldest hotels in the capital, dating back to 1851; is one of the few privately owned hotels in London, which has been in the same family for over 40 years. The hotel offers to its guests many services, such as: restaurant, bar, gym, internet point, baby-sitting service and 3 conference rooms.

The hotel has 129 rooms and suites; also it features 10 luxurious apartments with one, two or three bedrooms. All rooms are elegantly furnished and equipped with wifi access, air conditioning, satellite TV, pay TV, minibar, radio, safe, private bathroom, hairdryer and wake up service. The property has rooms for people with reduced mobility.

The hotel is located in a quiet side street of Piccadilly, in the heart of Mayfair; 28 kilometers from London Heathrow Airport, 200 meters from Green Park Underground Station and 3 kilometers from Victoria Railway Station. The hotel is within walking distance of some of London's major tourist attractions, including Green Park, Buckingham Palace and Bond Street.

Our room, 63, had no cold water the first day and the toilet would not flush. we moved to room 201 and that day the cable went out preventing use of the tv or internet. the staff has to be praised as does the location. i am afraid this is an older hotel that has not had periodic maintenance and it is now catching up with them.

Fabulous location, excellent service & having kindly been upgraded to a suite we were very "spoiled" but as it was a special occasion it helpes to make the whole weekend even more memorable.. thank you branca and the tean for such wonderful hospitality..

Room was excellent. high level of equipment and cleanliness. can't see the mirror from the hairdryer point - wife says must be designed by a man.
we didn't dine in, only breakfasts but the breakfast service was very slow and choices from the buffet limited. seemed to be understaffed.

Fabulous hotel in a good location;mayfair!cant get much classier.the staff are very pleasant and helpful and the room we stayed in was extremely well furnished and quite luxurious and had everything you needed including bathrobes.

This hotel is 2 mins walk from green park tube station which as we travelled via kings cross meant that we didn't need to change on the underground. the hotel is very clean , staff are excellent and i wouldn't hesitate in staying here again. breakfast was devine also.

We stayed at the hotel some years ago. since then it has been modernised and extended o is different from the photograph. we had a room on the 4th floor which was spotlessly clean and recently updated. the room overlooked the rear of the hotel which wasn't the prettiest view but it did mean that there was no road noise. the staff were all very helpful.

location was excellent very close to piccadilly with green park and the underground station only 3 minutes walk away. buckingham palace is only a 10 minute walk through the park

there is an excellent restaurant at 160 piccadilly, just beyond the ritz "the wolseley" would recommend it. 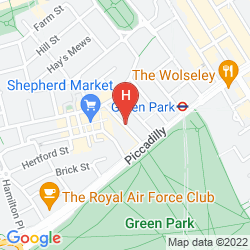