Enter your dates, select the room and choose out of 123 hotels in Djerba

The 15 best hotels in Djerba selected for you 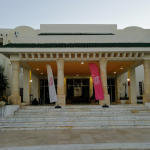 Perfect for a relaxing holiday, the Hotel Baya Beach Aqua Park, Djerba overlooks the bright sands and the clear waters of a lovely beach. It takes around 30 minutes by car from the Djerba Zarzis... Read more 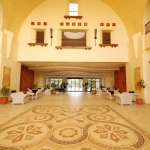 Hotel is an excellent option for all types of travellers. There are a vast range of leisure facilities which include a massive swimming pool; bars and restaurant; nightclub; gym, amongst others. Read more 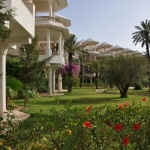 This 219-room beach hotel is cosy and comfortable and features oriental architecture. It immerses guests right away in an altogether different universe with its arches, moucharabies, fountains and... Read more 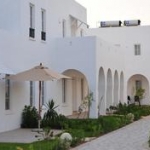 The Residence Les Jardins de Toumana is equipped with parking, 2 swimming pools, including a paddling pool, and it is only 200m from the beach. It offers laundry service and baby-sitting service on... Read more 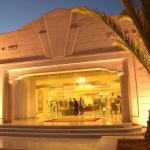 This 4-star hotel combines guests' well-being with the art of living. Renovated in 2009, the air-conditioned hotel offers 287 rooms in total with a choice of double, triple or quadruple rooms. Read more 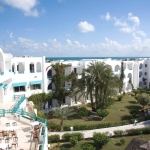 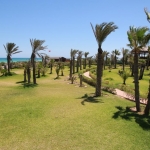 The hotel offers 210 rooms, 3 junior suites, a presidential suite, an excellent cuisine and a pleasant barbecue, located at the edge of the sea and endowed with one of the most beautiful fine sand... Read more 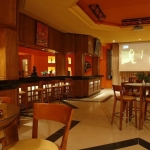 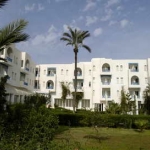 The Abir hotel is recommended for those who do not want to spend much. It an unpretentious building, situated at 350 meters from the small beach with sun loungers, thatched umbrellas and showers. Read more 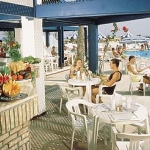 The rooms are in good conditions. They are quite small with basic decoration. Read more 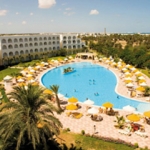 The hotel is build in a contemporary Arab style. The hotel services are completed with restaurant and 4 coffee shops. Read more 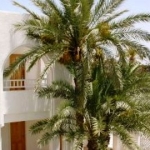 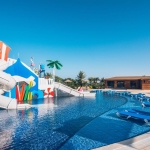 This luxurious hotel was renovated in 2003, and its typical Tunisian architecture makes it a real stand-out. This family-friendly beach establishment is especially suitable for golf fans, as it is... Read more 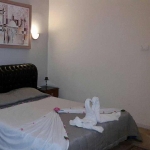 Facilities The hotel features various services and facilities, including a restaurant, a dining area, a café and a bar, for a comfortable and relaxing stay. Wireless internet access is available to... Read more

The beach hotel is a small, friendly and intimate, family-run hotel, with a great location close to the beach and other amenities, and offering simple accommodation units with 140 guest rooms in... Read more

Djerba is the largest island of North Africa, the Mediterranean Sea, located in the Gulf of Gabes, off the coast of Tunisia. The climate is decidedly Mediterranean and is characterized by little rainfall concentrated in the autumn and winter months. From May to August the rains are reduced, and the temperature of the sea water level reaches from the tropics. The ideal time for a trip to Djerba from May to October, with pleasant temperatures. The official language is Arabic and in French as a second official language.

The island's main attractions are its long and beautiful beaches, but the beauty of Djerba does not stop there. His landscapes there will be never the same await natural oasis full of flamingos and bright colors, a city rich in history, hundreds of mosques, and are surrounded by various landscapes.

Houmt Souk is the capital of the island, is well worth your visit; Leaving the most important center of Djerba meet other interesting villages such as El May, Midoun, Sedouikech and Guellala Ajim. Among the many beauties of the island we can not mention once again the magnificent beaches, which remain the main attraction. To the east of Houmt Souk opens the area of beaches called Sidi Mahrez The coastline is spectacular even beyond the tip of Rass Taguermes in the direction of Tazdaine and Sidi Ali, from which you open the Lido Plage de la Seguia ending to Aghir.

Djerba, is the pearl of the Mediterranean, an oasis of peace, and almost a land of dreams, which enchants every visitor.

Djerba is the largest island in the whole of North Africa, bathed by the magnificent Mediterranean Sea in the Gulf of Gabes, overlooking the shores of Tunisia and not far from the border with Libya. It is connected to Tunisia by a Roman bridge, which connects the island to the mainland.
Flat and sandy the island is about 614 square kilometers in total, covered with many varieties of plants and flowers, all of which form a large and protected natural oasis. The coast are bathed by a crystalline sea, with colours so bright as to take your breath away. Among the fields, small villages or isolated White coated houses are the typical menzels and their round domes (local houses).

The climate of the island of Djerba is decidedly Mediterranean and is characterized by very little rainfall concentrated in the autumn and winter months. From May to August the rains are greatly reduced, and the temperature of the sea water can be very pleasant. The ideal time to visit this pearl of the Mediterranean is from May to October. The official language is Arabic, and French is the second official language. The island's capital is Houmt Souk, a village full of charm where the serenity of ancient streets with immaculate White contrasts with the animation of the markets and squares. It is considered one of the most picturesque towns throughout Tunisia, and is a very well preserved, around the area of the soulk you can find a great number and variety of local handicrafts to purchase. Within the capital the main places of interest are: the Museum of folkrore and folk art, which displays traditional costumes and jewellery, and the historic fortress of Borj el-Kebir, an Arab town dating back to the fifteenth century. All the other cities of the island, are known for their special handicraft production or for its historical importance; Ajiim for example, is famous for sponge fishing. El-May has a market full of bright colours; Fatou produces hand-woven baskets; Guellala is a centre of the production of handmade pottery and porcelain; The Ghirba is known for its synagogue, one of the oldest and most famous in the world.

Other places of interest on the island are: the archaeological site of Meninx, where there are the ruins of the first city founded by the Carthaginians in Djerba, the Port where there are many fishing boats, and finally the Isle of the Pink Flamingos, a peninsula dotted with wild palm trees that in winter are frequented by flamingos and many other migratory birds.

This heavenly place is to be discovered. Djerba is synonymous with beaches and the clear water, awaiting you are almost 125 miles of coastline beaches to enjoy your vacation, although there are rocky areas and wild species in the western part of the island. For example, the Plage de Seguia offers a series of beautiful beaches, in the east coast instead, it is made ​up of crystal clear waters, white sands and palm trees.

Besides the island's beaches that are a "must see", it would be a shame to book your hotel in Djerba and limit yourself to a just a seaside holiday. The ideal game plan could be to alternate your days activities to one day by the sea and another day taking part in a more sporty activity like hiking. One of the most popular excursions are those around the Sahara desert. The asphalt ends in Douz, the gateway to the desert. From here you can reach the largest salt lake in North Africa, Chott El Jerid. There are many tours that leave from Djerba to the enchanted world of the Tunisian Sahara, made up of oases, cave houses and local markets.