Enter your dates, select the room and choose out of 389 hotels in Bologna

The 15 best hotels in Bologna selected for you

The Royal Hotel Carlton is a four-star luxury hotel in Bologna surrounded by an amazing garden where you can find comfort and peace. The railway station is located only 300 metres (0. Read more 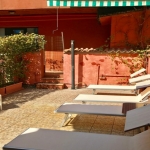 Handy for the Bologna Centrale train station, the Hotel Il Guercino is set at walking distance from the BolognaFiere Exhibition Centre. The hotel offers free parking facilities, it is set a few... Read more The Hotel Porta San Mamolo is a small hotel in Bologna with a gorgeous garden where guests can enjoy their breakfast in a pleasant atmosphere. The hotel is located in a quiet area of Bologna, close... Read more 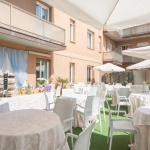 Suite Hotel Elite, located near Guglielmo Marco Airport, is a four-star hotel in the historic town of Bologna, Italy. It has modern designed rooms with wide windows that give one scenic view of the... Read more 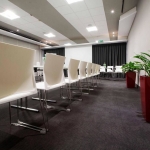 From the Living Place Hotel, Bologna centre is a 10 minutes drive away, located in Villanova di Castenaso, this 4-star hotel is mainly focused on business travellers. The hotel is easily reachable... Read more Hotel Meeting in Bologna is the ideal place for those travelling for work. For those reaching the place by car, a big outdoor parking is available for free and, for a charge, an indoor one. Read more Facing the Bologna Centrale train station, the 4-star Hotel Starhotel Excelsior is handy either for the city centre or for the airport. Providing luxury accommodation, fine dining and great congress... Read more 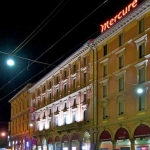 Set right in front of the Bologna Centrale train station, the 4-star Hotel Mercure Bologna Centro allows fast access by train to the nearest cities and to the city centre. Handy for the airport too,... Read more This hotel is strategically located in the city centre near the old town. The Grand Hotel Elite in Bologna is also close to some of the major tourist attraction sites and areas of interest such as... Read more Located just 150 metres from the Bologna Train Station, the Espressohotel Bologna Centrale, former 4 Viale Masini Design Hotel Bologna, is surrounded by cafes and shops. This establishment is next... Read more 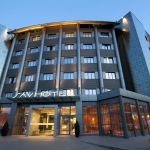 The Savhotel in Bologna is located just 9 km (5.59 miles) from the Guglielmo Marconi Airport. Read more The Hotel Re Enzo is located in the city centre of Bologna, only 10 minutes away from the wonderful Piazza Maggiore. The hotel has a 24-hour front desk where a friendly staff will assist you during... Read more Hotel Donatello is ideal for those who want to relax and enjoy the beauties of Bologna. The hotel offers several services, including 24-hour reception with multilingual staff (English, French,... Read more 12 halls designed for events of every size (from 8 to 400 people), the luxury Best Western Plus Tower Hotel Bologna offers custom solutions for your business meetings. Read more

Bologna is an Italian town of 384,653 inhabitants and the capital of the Emilia-Romagna region. The city is located in the Po Valley, close to the Apennine Hills, between the mouth of the Rhine valley and that of the Savena. This town rich in history and culture, is also recognized as a university city, considered the oldest university in the Western world.

Bologna is well suited for any vacation you have in mind, the path to cultural relaxing stay. To spend a day with your family and at the same time relaxing the Acqupark - Salute Più with spa and water park or the Terme di Castel San Pietro. The city has many attractions, including the historic center, some 38 km of arcades, the Piazza Maggiore, where there is also the Basilica of San Petronio, the Municipal Palace, the Podestà Palace and the beautiful Fountain of Neptune , by Giambologna, and the "two Towers" Tower of the Asinelli and Garisenda Tower, the Archiginnasio, the ancient seat of the University of Bologna; finally, art lovers can not miss a visit to the National Art Gallery, one of the most important galleries Italian which displays magnificent works.

A perfect destination for a short stay in a charming town. The center is very impressive with its medieval streets and Renaissance buildings that will transport you into the past. Among the many beauties of Bologna, visited thanks to the special HotelsClick, you can relax for the whole holiday. Among our listings you will find offers for every kind of need among hotels in Bologna.

To visit Bologna, other hotels at which you can stay are: