Enter your dates, select the room and choose out of 529 hotels in Dublin

The 15 best hotels in Dublin selected for you 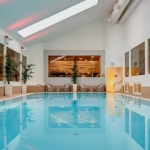 
Hotel The Shelbourne Dublin, A Renaissance

Overlooking the beautiful St. Stephen’s Green in the heart of Dublin, The Shelbourne hotel is an historic landmark 5 star rated hotel located just a 5-minute walk from Trinity College and the... Read more 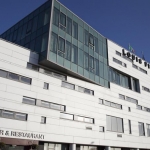 The Louis Fitzgerald Hotel is located 13.5 km from Dublin city center and is the ideal choice for both tourists visiting Dublin and for business travellers. Read more 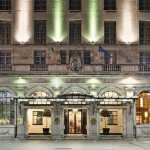 Riu Plaza The Gresham Dublin is an elegant and refined 4 starred building on O'Connell Street. The hotel offers a fully equipped fitness centre with treadmills, rowing machines, cyclette and an... Read more 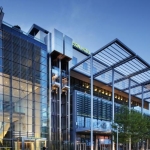 Overlooking the Port, The Gibson Hotel is located in Dublin, next to the 3Arena. The spacious rooms of this 4-star hotel in Dublin are tastefully furnished and feature luxurious bathrooms,... Read more 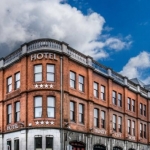 Formerly known as Trinity Capital Hotel, Trinity City Hotel is located in the heart of Dublin City Centre, just 2 minutes' walk from Trinity College. The most popular tourist attractions such as... Read more 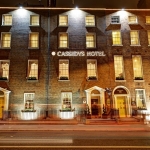 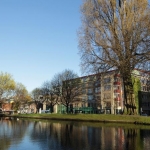 The Mespil Hotel in Dublin is located in an elegant area of the city centre, just a short distance from Stephen Green, Temple Bar, Aviva Stadium and Grafton Street. The Mespil Hotel rooms are... Read more 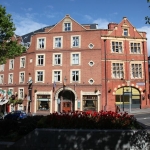 Harding Hotel in Dublin is one of the best choices to explore the city, literally being within walking distance of Dublin's main attractions, such as the Castle, the Cathedral and the Temple Bar. Read more 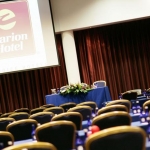 The Clarion Hotel Dublin Liffey Valley is easily accessible by Dublin airport. For its location and its services, this modern hotel is ideal for those who are in town for leisure or business reasons. Read more 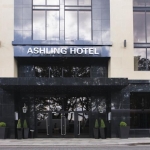 Ashling Hotel Dublin enjoys an excellent central location, close to points of interest such as the Dublin Zoo and the Guinness Storehouse. The lively Temple Bar is just 5-minute journey on the LUAS... Read more 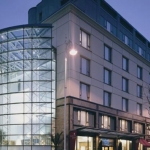 The O' Callaghan Stephen's Green Hotel is a deluxe 4-star hotel that offers stylish, modern interior design while maintaining an old world charm. Located in the heart of Dublin only a two... Read more 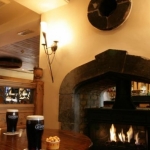 The Tara Towers Hotel Dublin offers stunning views over Dublin Bay, Dún Laoghaire and Howth. All rooms at the Tara Towers have private bathroom with hairdryer plus complimentary toiletries and are... Read more 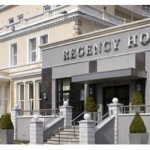 The elegant Bonnington Dublin, ex Regency Hotel Dublin, is located just 3 km from Dublin city centre. Booking at this elegant 3-star hotel in Dublin, you will enjoy free use of the Bonnington Dublin... Read more 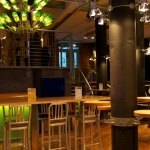 The Generator Hostel Dublin is located in the trendy neighborhood of Smithfield, close to the Old Jameson Distillery. Not far from this property you can find many points of interest including the... Read more 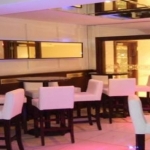 Russell Court Hotel is located in Harcourt Street, in the centre of Dublin, right outside St. Stephen's Green and walking distance from both Iveagh Gardens and the Gaiety Theatre. Read more

Dublin is the capital of Ireland; it is located in the east coast of the country, overlooking the Irish Sea.
Not everybody knows that Dublin is a very old town full of tradition. Funded by the Vikings and used as a hub for the slave trade, the capital of Ireland has a charming effect not only on its inhabitants but mostly on the visitors that every year feel the street of the centre of town. Maybe this is the reason why this destination deserves to be seen at least once in a lifetime.

Dublin The City Of Literature

Dublin is one of 5 cities in the world (along with Iowa City, Melbourne, Edinburgh and Reykjavik) that were named a UNESCO City of Literature. This recognition is due to the interest of the city towards literature, to the number of events dedicated to it and to the literary past of Dublin, which gave birth to great writers such as Oscar Wilde, George Bernard Shaw and James Joyce.

Joyce described the Dubliners as victims of a sort of moral and social "paralysis"; thus could not be farther from the current condition of the city, that is now very lively and full of cultural attractions and events.

What To Absolutely See In Dublin

In Dublin there are numerous Georgian buildings, in particular around Merrion Square, which houses the Irish Parliament and the Natural History Museum.

Other places to visit in the Irish capital are definitely the Christchurch Cathedral, one of the two medieval cathedrals of Dublinwith the Saint Patrick's Cathedral, and the Trinity College, founded in the sixteenth century, inside of which is the Book of Kells, a famous ninth century's manuscript. The Trinity College in one of the world’s oldest universities. Samuel Beckett, Oscar Wilde and Jonathan Swift, to name but a few, studied here.

Other attractions in Dublin are the National Museum of Ireland, the National Gallery, in which you can attend the permanent collections and temporary exhibitions as well, and the Dublin Castle, an ancient castle dating from the early thirteenth century.

For those who love nature, Dublin has many parks, like the central St Stephen’s Green and the Phoenix Park in a less centred.

The vibrancy of the capital is symbolized by the Temple Bar district, a meeting place for young people, dotted with pubs, theaters and bars. This is the centre of Dublin nightlife, in which you can attend street artists' and musicians' performances, and find some important cultural associations such as the Irish Film Institute.

Finally, for those who love beer, in Dublin is the Guinness Storehouse, where you can learn all about the history and the production of one of the most famous beers in the world, and also find some special offers to buy its gadgets.

If you would like to visit Dublin, here are some of our best hotels of the capital:

Cuisine: What To Taste

Many people say a good way to know a town is to taste the dishes that made its history. In the case of Dublin, our tip is to enter one of the pubs in the centre of town, where you can taste the excellent home brewed beers and excellent dishes. Mind you: pubs in Dublin serve dinner only between 7 and 8 pm. Clubs and bars do not close early, though, and it is possible to hang around with locals while sipping a beer. About beers: beer lovers surely know Dublin is the home of Guinness, a stout beer that conquered even the most refined palates, also used to cook dishes and cakes. For those willing to try more original flavours, the tip is to try lager and flavoured red beers. Amongst the red one, the cherry beer is worth a special mention, a beer obtained by letting full cherries ferment with hop and malt together.

For those who are not used to it, traditional cuisine may be a little too heavy, but it is absolutely worth a try. In pubs it is possible to try Irish Stew, the most famous Irish dish. It is stewed lamb or ram, served with potatoes and onions on the side, cooked soaked in Guinness beer. Alternatively, you can opt for the classic Fish&Chips or salmon with toasted bread. For the most refined palates, oysters are absolutely a must, to be eaten rough. You can try these dishes in one of the many pubs in the Temple Bar area, like Auld Dubliner, a famous club with live music and a great menu. Alternatively, The Pale will conquer the most hungry traveller: located halfway between the Guinness Storehouse and the Christ Church, this pub offers quality sandwiches at a very good price.

Events Not To Miss In Dublin

There are several sport events and national feasts that attracted and seduced the most curious travellers.

Starting from the Six Nations Rugby, a rugby tournament featuring six country teams like Wales, Italy and France, for seven weekends from February to May. It is not only a sport event, it is a feast that involves all Ireland conveying the warmth of this country.

An absolute must is St. Patrick's Day, the feast of the capital that, unlike what we may think, lasts for four days in the entire town. Saint Patrick’s Day is on 17 March, the party piece, with chariots and dancers filling the streets of the centre. The closing ceremony is a show within the show, with fireworks shot from Liffey, a real attraction for people all ages.

Best Time Of the Year To Visit Dublin

The best time of the year to visit Dublin is between June and September. People should choose these months not only for the temperatures, which are definitely milder, but mostly for the long days: in spring and even more in summer the sun sets very late (in August even at 11PM) whilst in winter it is already dark at 4 PM. In the suggested time you will have the chance to take long walks or hikes with no serious threats of rain. In Ireland it rains 150 days a year and visiting Dublin under a storm, although suggestive, may be really uncomfortable.

How To Reach (And Move Around) Dublin

To reach Dublin you may choose one of the many directs flights from the major European airports. Dublin Airport, where carriers such as Air France, Ryanair and British Airways regularly land and take off, is well connected to the town, thanks to a shuttle bus provided by AirLink.

The best means of transportation in Dublin are surely buses and trains. In general, Dublin is a small town which can be easily enjoyed on foot. On rainy days, however, it s best to have some alternatives. Dublin Bus company provides rides from about 6 Am to 11 PM. Fairs are calculated in accordance to the destination. Tickets can be purchased at the ticket machines on board, but you must have the exact money at hand.