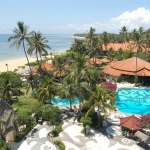 Nice but not great

This is the worst place i have ever stayed where do begin! 1) reception refused to call a local taxi after i declined their own expensive taxis eventually i was directed to a public pay phone and told to ring one myself despite no speaking indonesian. a friend who lives here ordered one through her phone no joke and the security charged money to enter the premises on our return journey. i tried tell security i was a guest but was ignored i complained to reception as i felt bad for the taxi driver was put out of pocket so gave him the money. reception said they must have thought he was using the fast ferry carpark but not true as i said to security 3 times my room no and that i was a guest, reception did not refund me and said it was the taxi driver's bill so why did i pay it!!! 2) breakfast caters for asian guests only as the buffet doesn't even have bacon, hash brown or real sausage seriously who wants noodles or curry at 7am! 3) at check in tried to bill me again for an additional bed for my child said records did not show i had paid extra, thankfully i had a print out of booking although still took 30 minutes of arguing after that and i was the only new guest at reception having this issue! 4) i had to wait over 90 minutes after arriving for the room to be made up 5) pool at the garden wing has algea 6) onsite resort taxi driver followed repeatedly trying to get me organise a trip, i found this inappropriate within the hotel grounds - on the street you'd expect that not within the complex same with the onsite hotel shops! i found myself avoiding certain parts of the hotel grounds because of this. 7) the place in general looks tired and is need of serious renovation. 8) it's a good 20 minute walk into the heart of town wouldn't be a problem if reception would phone a local taxi of course but i ended enduring the walk for each meal and getting taxi back to the hotel.

This is a hotel with varying accommodation styles - cottages, motel & hotel rooms. stayed for an international event & was well suited. staff were courteous & helpful.

A great venue with numerous facilities, friendly staff and value for money.