Enter your dates, select the room and choose out of 1777 hotels in Santorini

The 15 best hotels in Santorini selected for you 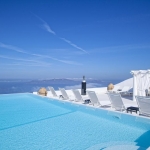 Hosted in an eighteenth century palace, The Tsitouras Collection in Firostefani offers luxury accommodation and high class service. Its unique position, on top the Firostefani village, guarantees a... Read more 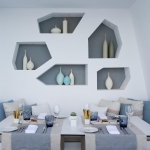 Let yourself be charmed by Grace Santorini for an exclusive stay in the picturesque village of Imerovigli. This awarded five star boutique hotel boasts accommodation that will satisfy even the most... Read more 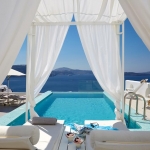 Treat yourself with a fairy tale stay booking at Filotera Suites, one of the most exclusives structures in Santorini. Located in enchanting Oia, in a traditional Cyclades building, this luxury hotel... Read more 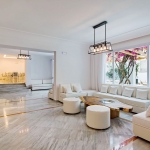 Cavo Bianco is a luxury resort near Kamari, a nice village on the South-eastern coast of Santorini. The black beach of Kamari is 5/6 minutes walking. Read more 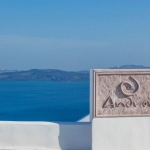 Andronis Boutique Hotel is a wonderful 5-star property literally dug into the rock of a cliff overlooking the sea of ​​Santorini: the view is breathtaking. The structure is located in the centre of... Read more 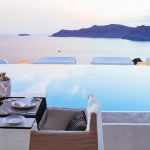 
Katikies Kirini Santorini - The Leading Hotels Of The World

Among the winding paths of the enchanting village of Oia lies Kirini Suites & Spa, one of the poshest hotels in Santorini. This five star property is part of the prestigious Relais & Chateaux... Read more 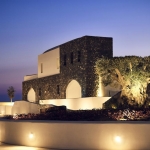 Santo Maris Oia Luxury Suites & Spa is an extra luxury resort about 350 m (1,150 feet) from the picturesque centre of Oia. Entering the residence, you will be literally captured by the view of a... Read more 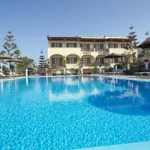 Property Location With a stay at Santa Elena in Santorini (Kamari), you'll be minutes from Wine Museum and Kamari Beach. This hotel is within close proximity of Panagia Episkopi and Museum of... Read more 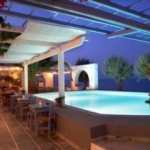 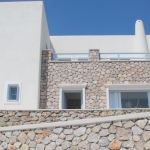 Property Location Located in Santorini, Enastron Suites is minutes from Prophet Elias Monastery and Panagia Episkopi. This villa is within close proximity of Ancient Thira and Museum of Minerals... Read more 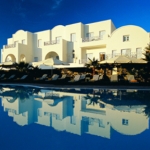 This hotel affords Aegean Cycladic-style architecture and has been elegantly decorated with whitewashed walls and dashes of colour. The air-conditioned beach hotel comprises a total of 59 rooms;... Read more 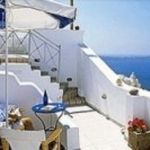 This 4 star hotel is located in the city centre of Santorini and was established in 1974. It is close to the CALDERA-VOLCANO CLIFFSIDE and the nearest station is NOT APPLICABLE. Read more 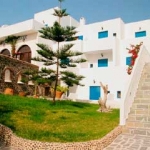 The hotel comprises a total of 106 guestrooms. The modern lobby area of the hotel offers its guests a reception area with 24-hour service, a safe and a currency exchange counter. Read more 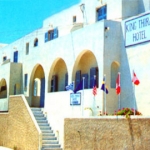 The city hotel was named after the first king of Santorini and constructed, designed, and furnished in traditional Cycladic style. It comprises a total of 17 rooms and features a hotel safe, a bar,... Read more 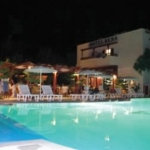 The air-conditioned beach hotel affords a typical Cycladic style and a total of 25 rooms and a car park. Read more

Santorini is a volcanic island that is part of the greek Cyclades Islands, as well as Mykonos and Paros, and is located between Ios and Anafi. The island is now an important tourist destination thanks to its stunning scenery, beautiful beaches and picturesque villages that are definitely worth a visit. Because of its great tourist importance, Santorini has a very rich range of accommodations on offer, ranging from family-run hotels to 5-star hotel facilities (such as the Antinea Suites & Spa Hotel Santorini).

Villages in Santorini.The current shape of the island derives from an explosion that occurred in ancient times, which generated a flooded crescent caldera, in the centre of which there are some small smoking islands. Some villages overlook the caldera: Fira (the main town of Santorini), Tharasis and Ia (also called Oia); the latter is perhaps the most charming place in Santorini, where you can admire a spectacular sunset. The village is in fact close to the sea, but, unlike many others, allows you to fully admire the sunset over the sea. Definitely worth a visit are even the areas outside of the villages, where you can discover vineyards, gardens, small churches and cave houses, some of which are uninhabited.

Tourist attractions. Santorini boasts a wide variety of beaches, the most famous of which are the black pebbles beach of Kamari, the Red Beach near the village of Akrotiri and the small White Beach which is accessible only by sea. Thanks to its crystal clear sea, the island is an ideal destination for sports lovers, who enjoy the various water sports like scuba diving and snorkeling. In addition to its natural wonders, Santorini also has some historical attractions. For example you can visit the ancient Minoan city of Akrotiri, preserved in volcanic ash, the city of Thera, founded by the Dorians in the ninth century BC, and Fira, where you will find the Museum of Prehistoric Thera and the Archaeological Museum. Santorini is therefore an interesting tourist destination for both group travel and romantic vacations. The island in fact has been for some years a popular destination for weddings and honeymooners.