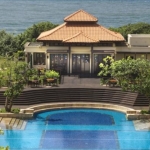 Warmly greeted upon checking in and impressed by the lovely room with amazing views overlooking the valley of pools and the beautiful ocean. unfortunately there was a bit of a draft which we discovered was due to the broken window which we had to report by going to reception directly as the phone was not working either. thankfully, the window seemed to have been fixed by the time we returned to the room after a lazy lunch at the lobby bar, 31 degrees, which was cozy and intimate with great views but underwhelming food. later in the evening, we headed down to coral tree for a buffet dinner. the food was enjoyable but it would have been better had the hot buffet items actually been hot. the breakfast buffet was served at the same restaurant and had some potential too, again let down because it was cold. however, the greatest disappointment was the service at breakfast. we had requested coffee from a server who had ushered us to a table, suggesting that he would bring our beverages to us. a pot of coffee arrived but no cups to drink from. he went off stating that he would bring cups for us. he seemed to have forgotten us though, serving others whilst we continued to wait and had to request cups/sugar/milk and spoons from at least 3 other servers before we finally managed to just enjoy a little coffee, well after breakfast was eaten. the dinner service was friendly and efficient so we were rather disappointed at the way the breakfast service was run.  not quite what would be expected of a 5-star luxury resort. overall, enjoyed spending time in such a picturesque hotel but definitely room for improvement in a few areas.