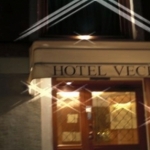 The hotel was not quite as i expected.

Hi, the hotel was not quite as i expected. things i did not like: - when we got in the middle of the night to the hotel we found out that the room was not in the same place where the reception was, we had to follow a map to find it - the breakfast was quite poor, they had butter that was expired but they were still serving the people with it, most of the times they did not have enough yogourt, water was from the sink but in a bottle, etc. - the fringe was broken, we reported that but nobody even bothers to come and fix it. - we had the bad luck to have some very windy days, and in that area, the wind was even more powerful.